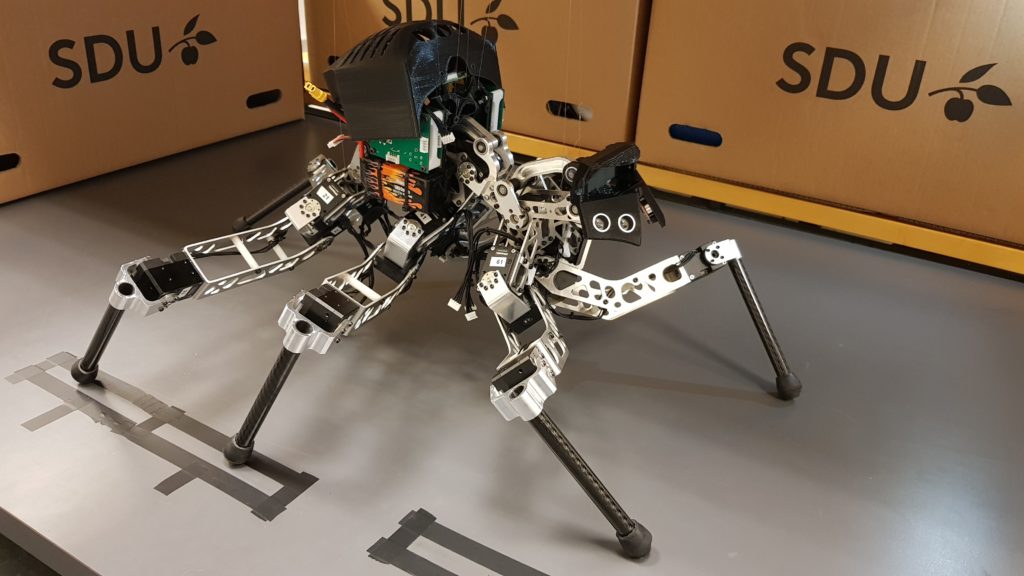 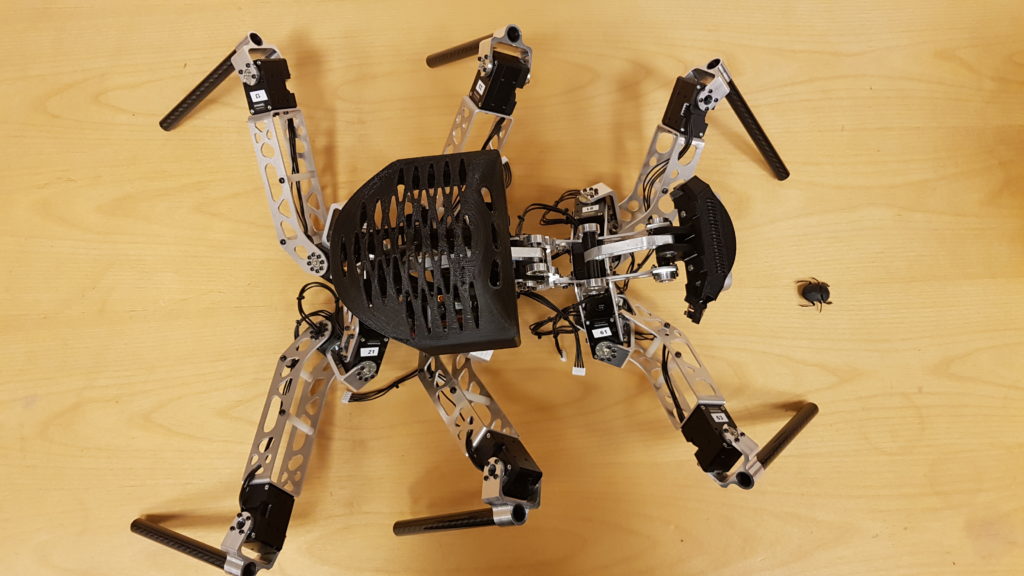 The dung beetle-like robot ALPHA. It is developed under the DLife project. ALPHA is based on the morphology of the South African dung beetle S. galenus. Its structure is made of aluminum, where the body consists of three sections connected with backbone joints. It has six legs, where each leg has three joints. In total, it has 20 active joints, 20 joint angle sensors, 20 motor current sensors, and two ultrasonic sensors, and a camera at the front for obstacle detection and navigation (see Billeschou et al., Applied Sciences. 2020 for more details).

This work is in collaboration with Stockholm University, Sweden and Functional Morphology and Biomechanics at Kiel University, German under the DLife project. 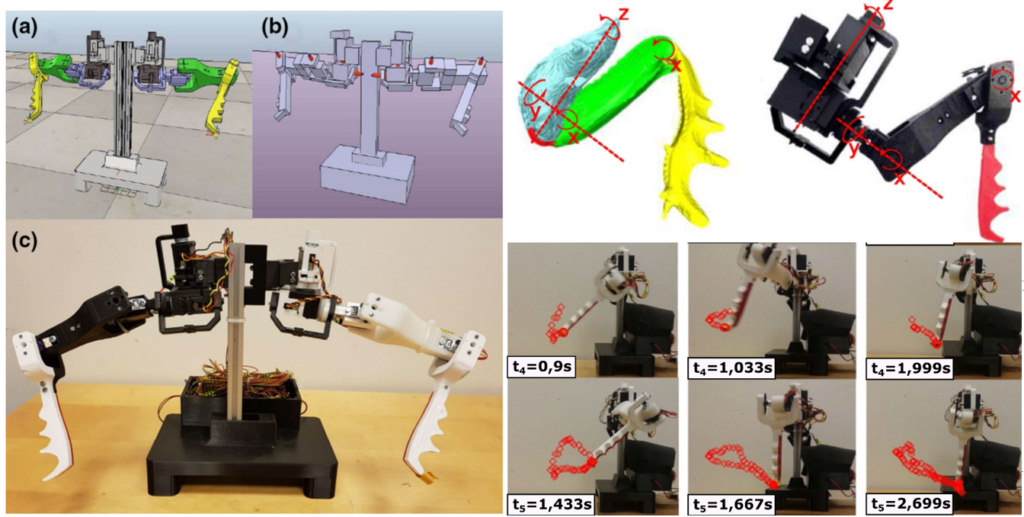 African ball-rolling dung beetles can use their front legs for multiple purposes that include walking, manipulating or forming a dung ball, and also transporting it. Their multifunctional legs can be used as inspiration for the design of a multifunctional robot leg. Inspired by this, we developed real robot legs based on the study of the front legs of the beetle. The leg movements of the beetle, during walking as well as manipulating and transporting a dung ball, were observed and reproduced on the robot leg (see Ignasov et al., Artificial Life and Robotics. 2018 for more details).

This work is in collaboration with Stockholm University, Sweden and Functional Morphology and Biomechanics at Kiel University, German under the DLife project. The second version of the leg with a compliant tarsus. The compliant tarsus was designed according to the so-called fin ray effect. It consists of five rays/blades embedded inside its triangular structure. Its length is about 5 cm which is proportional to the tarsus of the dung beetle. It is printed using 3D-printing with a compliant material (i.e., rubber). Although this design does not fully capture the complete complex structure of the tarsus of the dung beetle, it, as an abstract version, shows flexibility and compliance to passively adapt its shape to follow the contour of a substrate as observed in the beetle. Besides the passive adaptation, the tarsus design also acts as a damping system to reduce contact force when the leg touches the ground.

The performance of the leg can be seen from these Videos

This work is in collaboration with Functional Morphology and Biomechanics at Kiel University, Germany. Dung beetles show fascinating locomotion abilities. They can use their legs to not only walk but also manipulate objects. Furthermore, they can perform their leg movements at a proper frequency with respect to their biomechanical properties and quickly adapt the movements to deal with external perturbations. According to this, we have developed here the first version of a robotic leg based on a hind leg of the European dung beetle “Geotrupes stercorarius” which plays an important role for both locomotion and object manipulation and transportation. We analyzed the leg by using a desktop microCT scanner. The post-processing of the microCT data, we interactively segmented the parts of the beetle’s legs from the dataset by assigning different labels to individual pixels within the stack of cross-sectional images. The segmented structures can then be visualized independently from the remainder microCT dataset and be exported as polygonal surfaces for 3D printing. As a first step, for developing the robotic leg, we here focus only on the three active joints of the dung beetle hind leg. Three segments (coxa, femur, and tibia) between the joints are simplified and designed by following the proportion of the hind leg (i.e., coxa:femur:tibia is 1:1.2:1). The lengths of the coxa, femur, and tibia parts are 7 cm, 8.4 cm, and 7 cm, respectively. They are printed using 3D-printing. The leg is used as an experimental platform for studying locomotion and object manipulation.

The performance of the leg can be seen from this Video